What is this page about?:

My opinion is that Toshiba DVD-ROM drives are one of the best readers for DVD and CD media. But they have one big flaw. The can't read the DVD media at high speed. Especialy for CSS protected media and DVD+R or DVD-R DVDs. Zaitec2 and >NIL: recently discovered that this limitiation is hidden inside the firmware and they successfully removed it from the Pioneer DVR-105 drive. So I decided to do the same for Toshiba firmwares.

I couldn't find it I don't have that much of experiences than others patcher has. But few days ago I've got an email from a guy called Neo. He said he would like to help me and so in few days he found and removed the read limit inside the SD-M1712 1004 firmware. By using his method I've also patched all other SD-M1612 firmwares. So I don't take any credit for this patched firmwares. The latest SD-M1802 drive is a bit tricky to patch so I asked The Dangerous Brothers to help me. Neo also helped and together they did a splendid job with the firmware. The drive works fast and again proves that IMHO Toshiba drives are the best readers when we release all it's powers ;).

For the comments and some screenshots of the J031 firmware for the M1802 drive in action please read the posts in this forum topic.

The 18XX firmware series for SD-M1612 revA and revB drives can read also +R(RW) standard but have on flaw. The max CD read speed is limited to 40x MAX. Neo found and also removed this limit.

I've decided to put the downloads on standalone page seperated from main firmware page, because it would make too much confusion. If you want to download original firmwares then visit the main page. And of course here are the standard warnings:

This firmware ARE NOT official Toshiba firmwares so flashing your drive with WILL VOID WARANTY. Flashing your drive IS RISKY and can PERMANENTLY DAMAGE your drive! You flash AT YOUR OWN RISK and neither me or anyone else is responsible for bad flashing or damage to the drive due to using this firmware. If you have second thoughts about flashing then DON'T DO IT!

Read ALL the text on this page and if you want to post comments post them in the forum, do not email me about it! I will not answer to emails about it! Please post in this topic in the firmware page forum.

For now only SD-M1612 and SD-M1712 firmwares are patched. Some day others will to. Don't send me email when and wich ones will get patched! If you have a Compaq SD-M1612 drive with 1CXX firmware you can flash with this firmwares. Will work perfectly.

All firmwares are RPC-1 (Region Free) and have the CSS media read speed limit removed!

For the SD-M1502 drive the firmware only removes the CSS media and +R media speed limit! The DVD-R rip speed is limited to 2x. Don't ask why. Me and NEO hate this drive. NEO spent many weeks trying to make the firmware with no speed limits and I tested. While testing I lost a SD-M1502 drive and a SD-M1712 (again don't ask how). So consider yourself lucky that I even released a firmware for this drive. And don't email me if it doesn't fully works as it should. revB 1002 firmware is fully untested. Should work.

SD-M1612 18XX fimwares also have the 40x CD read speed limitation removed so with those firmwares you can read at full 48x speed.

Firmwares for SD-M1612 revA/revB and and SD-M1712 have allready been tested by me and FLASHMAN. Someone with SD-M1612 revC please test and report back to me if the firmware J004 works.

All the firmware versions have changed first letter of the firmware name. All start with J so that you can easily identify them.

If you have problems downloading then disable firewall. I am using anti-leech script to hopefully prevent offsite linking and bandwidth stealing.

*** Instructions copied from my KiSS page ***
Here is how to flash. Unpack the firmware for your drive into the hard drive or floppy. Something like this (Image 1): 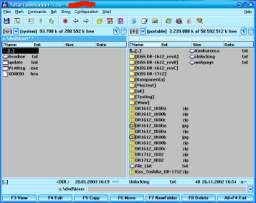 Image 1
You need three files: V152teg.exe, *.hex and update.bat. Then boot into TRUE DOS. THE WINDOWS DOS BOX IS NOT GOOD! I used a Windows 98 installation CD to boot to DOS. Since I still have FAT32 partitions I unpacked the firmwares to the hard drive. If you have the NTFS partitions under DOS this partitions will not be visible. Make a boot floppy and copy the files onto them... For me after the boot I got something like this (Image 2): 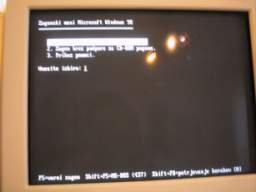 Image 2
Then I pressed SHIFT+F5 to get only command prompt so that no extra drives load. This is important since extra drivers only use extra memory wich you will need for flashing (read problems section about Malloc error).

Then I moved to the directory where the files are (Image 3). 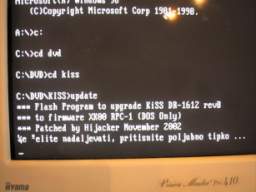 Image 3
As you can see I moved to the "c:\dvd\kiss" directory, since in Windows that is where I copied the files. If you have them on floppy then just run update.bat from the floppy (A:). Press space or any other key and the update program will start to run. If you get a malloc error read down bellow for instructions what to do to solve it. Then it will list you IDE devices. Every IDE devices has its number. So if it's located as secundary master the number will be 2. If the program asks you where the drive is located type 2 (or any other number depending on what the list says). If it's the only CD/DVD device connected it will not ask you for the location of it. The tray will get open. DO NOT CLOSE IT! Then the programs asks you if you want to overwrite the flash (Image 4). 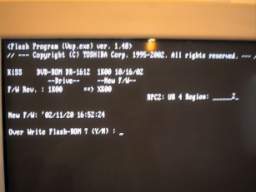 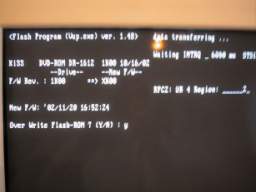 Image 5
DO NOT PRESS ANYTHING OR RESET/TURN OFF COMPUTER UNTIL IT'S DONE!

Nothing should go wrong here! I flashed over 30 Toshiba DVD drives and all are still working now. Just hope that the lightning strikes in you house and there is a power failure while flashing. I can't do anything about it :o).
When done flashing the tray will close on its own and it will display you info about the new firmware (Image 6). 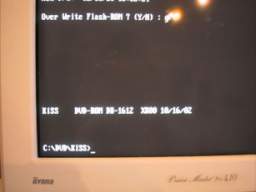 Image 6
If the new firmware has the J in it's name (ex. J004) then flashing was a complete success. To check use my DISCInfo program. It should state No Lock Detected and the firmware version should start with J letter (ex. J004, J806,...)

All images are made after the flashing with JXXX series firmwares.

WARNING! Not all medias can be read good at fast speed. It all depends on the quality of the dye and I also noticed that it depends on how the media is balanced, due to vibrations at high speed read. So do not get suprised if you get a poor reading results on some media.

Some screenshots are made by me (blue themed ones), the rest is made by FLASHMAN for wich I thank him.

- The Toshiba drive freezes when you try to play the movie
o The drive region was not set before flashing. Flash back to original firmware set a drives region by playing a movie and reflash back to patched firmware

- When I run update.bat I get a malloc error
o This error happens if you do not have enough convention memory avaible (doesn't have any relation to RAM). Billy from M$ said that 640k will be enough so don't complain to me :p. To fix this, boot the computer without any drivers. Just delete config.sys and autoexec from the boot floppy or if you have a Windows 98 boot disk press F8 just before it's start booting and choose safe mode with command prompt. You can also try to press F5 wich will bypass config.sys and autoexec.bat (windows 98 only). If you use boot disk that >NIL: made then on bootup when it shows you a menu choose Minimal boot.

- Neo! The guy who found the limitations and removed it. Without him all this would not exsist. I owe everything to him.
- The Dangerous Brothers! Huge thanks to them for the work on the SD-M1802 firmwares. It was they who made the firmware region free and who helped remove the limits on the J031 firmware.
- Big thanks also goes to FLASHMAN who helped me test the firmwares.
- All the guys from firmware page and the forum who kept buging me with the question how to remove the stupid limitations. Now you can. So stop buging me about it :o).

Go to top of the page